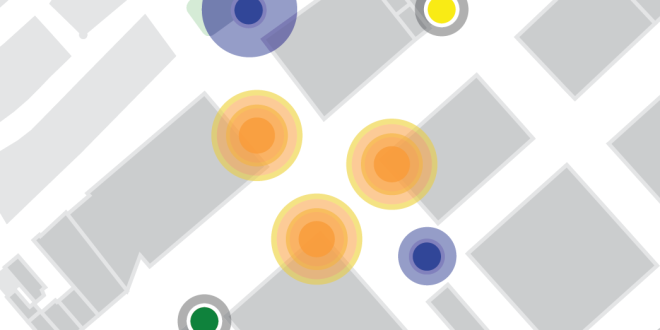 According to IBM, we generated 2.5 billion gigabytes of data every day in 2012.  One of my passions is making that data comprehensible, especially when it concerns cities and the urban environment.

Which is why I was excited when I found out about the BigIdea sponsored by the Alliance for Downtown New York for this year’s BigApps Competition.  Their idea, called StreetIQ, was to have Water Street in Lower Manhattan be the smartest and most responsive street in New York City.  They made data available on businesses, transit, pedestrians, and ferry ridership, but the most interesting to me was the data from the 38 BigBelly Solar Compactor and Recycle  units in and around Water Street, as well as the wireless access point data.  This instantly sparked thoughts of integrating other data sources such as 311 service requests, CitiBike system data, and social media data from Instagram, Twitter, and Foursquare.

The task was deceptively simple: make these various data streams intelligible and actionable. I’ll be blogging more about the specific data sources and how we worked with the data, but the end result is our platform CorridorScope.  Working with the amazingly talented Jeff Ferzoco, we were able to combine data from the wireless access points and BigBelly Solar Compactors with Citibike dock status and 311 service requests to provide a glimpse at a day in the life of Water Street. 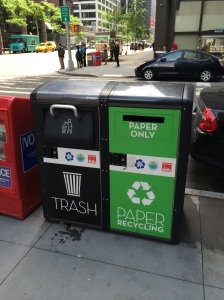 BigBelly Solar Compactor (left) and Recycler (right) on the corner of Water Street and John Street.

In this case, the day is Monday July 7, 2014.  The wireless access points in orange swell with the number of probe requests received for that minute.  To smooth the fluctuations we actually take the average over two minutes.  We plan to smooth this data even further with a longer period moving average for user volume.  Already you can see the concentration of wireless activity at the South Street Seaport and Old Slip during the overnight hours where there are residences.  During the daytime hours, you see the activity increase in these areas, but also more broadly along the street.  If you watch the lower left-hand corner, you can see the flash as people get off the Staten Island Ferry and come within range of the two wireless access points at the corner of Water Street and Whitehall Streets.

Status of BigBelly at Water Street and Gouveneur Lane. It turned yellow at 11:30 am and red at 1:22 pm, showing relatively heavy usage during the lunch hour.

With the BigBelly Solar Compactors, you can see them change color as trash is deposited in them.  The BigBelly at the corner of Water Street and Gouveneur Lane went from green to yellow at 11:30am, just as lunch was starting, and then from yellow to red at 1:22 pm as lunch was wrapping up.  Seeing this happen in time shows how the street is being used.  There is a nice open area along Gouveneur Lane with trees and benches, making for a nice spot to enjoy lunch outside the office.

With Citibikes, we recorded the number of bikes docked at the 8 docks every minute (the shortest interval that Citibike reports the data through their online dock status tool).  The outer ring shows the capacity of the dock and the inner dark blue circle shows the number of bikes docked at that location.  You’ll notice the docks are virtually empty in the early mornings but begins to fill as people come to work.  While the status fluctuates a little during the day, there is a strong outflow of bikes as people get off work, leaving the docks empty again for the overnight hours.  This pattern suggest that Citibikes are being used to as part of the regular commute for people working in and around Water Street.  More granular data on bike destinations and origins isn’t available in real-time.

We show 311 Service Requests for the day, appearing as they were received.  We’re still working on the next steps, which include providing details about the service requests.  The first request was about a broken Muni Meter, while the next two are in reference to a broken fire hydrant (likely the same hydrant). The others include a Department of Parks and Recreation (DPR) issue possibly involving an injury, a DPR structural issue, an asbestos complaint, another broken Muni Meter, and a damaged One Way street sign.  This data isn’t available in real-time but provides interesting insight into a day in the life of a major corridor in one of the busiest business districts in the world.

We weren’t able to integrate the social media data as we’d hoped before the submission deadline, but we think we have a great tool for visualizing data of this kind while making room for even more data sources. So check it out and let us know what you think.  Please also vote for our project if you like it.  We think federating data like this will help build greater awareness of our public spaces and make them function better places to live, work, and play.